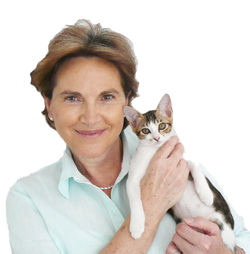 Cynthia qualified as a veterinary surgeon in Edinburgh, Scotland in 1974 and on qualifying spent three years in mixed animal practice in what was then Rhodesia (now Zimbabwe) in southern Africa. During this time she set up a spay-neuter clinic for the SPCA, in one of the African townships, which also provided a drop-in facility for the treatment of sick animals. She arrived in Hong Kong in 1977 and lived here for 23 years until 2000. She was the first full-time veterinary surgeon employed by the SPCA and continued a long association with the organization, first as a veterinary surgeon and then as Deputy Executive Director. During her time in Hong Kong, she was a member of the Veterinary Surgeons Board as well as a member of the Animal Welfare Advisory Group.

Cynthia’s passion has always been in animal welfare and through her work she became aware that one of the main reasons owners surrender animals to shelters is because of behavioural problems, resulting in the euthanasia of large numbers of young, otherwise healthy animals. Behavioural problems have serious implications not only for the animal but also for the family who often suffer severe stress when the human-animal bond breaks down.

Wishing to continue to improve the quality of life for animal and owner, Cynthia completed a three year postgraduate diploma in Companion Animal Behaviour at Southampton University before joining a behavioural referral veterinary practice in the UK.

Cynthia returned to Hong Kong in March 2010 and set up the first veterinary behaviour practice which deals solely in behavioural problems.

Cynthia is a member of the following professional associations:

Why I am a behaviourist

During my long career as a vet, working mainly in animal welfare organisations, I came to realise that sadly, the primary reason for euthanasia in otherwise young, healthy animals is concern over some aspect of their behaviour. The numbers are staggering and in the USA alone more than 20 million animals are put to sleep in animal shelters each year with the majority of them having been brought there because of behavioural problems.

Behaviour plays such a critical role in the relationship between a pet and its owner and is an important consideration when choosing and keeping a pet. If behaviour becomes a problem this leads to a breakdown in the bond between the pet and its family and the consequences of this as we know are often fatal for the animal but equally devastating for the family.

Having witnessed the tragic consequences of this breakdown in the human-animal bond over many years I wanted to do something to reverse this and qualified as a behaviourist. This would enable me to provide owners with a way to resolve behavioural problems so that pets and their owners could stay together and enhance the lives of both. As a behaviourist I also feel that I have a role in education particularly with regard to responsible pet ownership and more especially in preventative behaviour counselling so that animals do not end up being an unnecessary statistic.